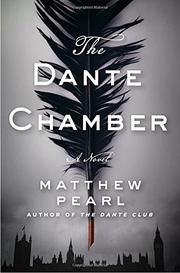 This well-wrought sequel of sorts to The Dante Club (2002) shifts the action to England and another set of literary lights who seek to solve crimes tied to The Divine Comedy.

In late 1869, around the time a British member of Parliament dies under the crushing weight of a large stone on which a Latin message is written, the poet Christina Rossetti has an “ominous foreboding” about her missing brother, the erratic artist Dante Gabriel Rossetti. She, Robert Browning, and William Rossetti (another brother) seek clues at Gabriel’s London home, which he shares with a monkey, a raccoon, and other nonwriting animals. The humans recognize links between the MP’s death and punishments in Dante’s “Purgatory.” They will be joined in their probe by Alfred Tennyson and Oliver Wendell Holmes, visiting from Boston, and bothered by the well-read Scotland Yard Detective Adolphus “Dolly” Williamson, who has trouble with the Fenians but is more intrigued by the Dante killing. Soon it's killings, starting with an opera singer whose eyes are sewn shut before she's bizarrely impaled. While the literati grow concerned that Gabriel is involved in the deaths, an ex-Pinkerton operative arrives in England to try to capitalize on the crimes the way he did with those in Boston that Pearl (The Last Bookaneer, 2015, etc.) described in The Dante Club. Displaying extensive knowledge of the period and the writers, Pearl builds an intricate, well-layered plot. His addition of Holmes, one of the previous book’s main players, supplies a bridge between the U.S. and U.K. Dantean crimes. The language has nice period touches but overall is less overdone than in Pearl's past. And his focus on Christina among several imposing male writers makes narrative sense but is also a refreshing choice and produces a complex, appealing character.

A thoroughly entertaining excursion to the literary England of the late 19th century with some ink-stained amateur detectives.