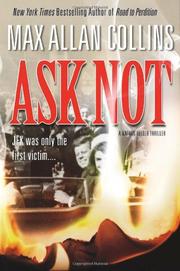 Collins (of Road to Perdition fame) wraps up his trilogy of thrillers on the John F. Kennedy assassination (Target Lancer, 2012, etc.), piling the conspiracy theories nearly as high as the corpses.

As the book opens, superbly well-connected detective Nathan Heller nearly becomes one of those corpses himself. It’s 1964, a year since JFK was killed, but there's something about the mysterious man who almost ran down Heller and his son in Chicago after a Beatles concert that leads Heller to think the president’s death left some unfinished business. As he bounces from Chicago to Los Angeles to Dallas, Heller recalls his own place in JFK’s orbit—he was involved in an FBI and CIA plot to take down Fidel Castro, with Lee Harvey Oswald and Jack Ruby playing bit roles. Soon, he uncovers not just the convoluted plot to kill Kennedy (those who’ve seen Oliver Stone’s JFK will know its rough outline), but an effort to eradicate anybody who might leak how the assassination really went down. In Heller, Collins has mastered the tone of an old-school dick, though the clipped patter sometimes feels like reprocessed Dashiell Hammett and Mickey Spillane. (Echoes of Spillane aren’t surprising, since Collins has co-authored his books.) And the book often wears its research like a Mafia goon’s ill-fitting suit, with characters talking expansively about intricate details of the assassination plot. (The book’s pages of acknowledgments are largely filled with citations of conspiracy-theory lit.) More entertaining are Heller’s moments with investigative reporter Flo Kilgore, who’s working to expose the JFK plot. Their relationship is a fun gender switch, putting Heller in the typical girl Friday role, and their banter about sex and politics gives the narrative a needed spark.

No threat to the Warren Commission, but a fun, light foray into alternative history.