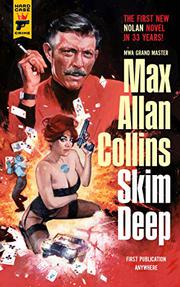 The prolific Collins resurrects Nolan, the thief who’s tried to go straight since his multivolume criminal career began, for another adventure that will return him to the dark side.

Is it ever too late to settle down? Nolan, who owns and manages an Iowa restaurant and lives with Sherry, the hostess he rescued from the kidnapper Coleman Comfort in Spree (1987), decides that 55 isn’t too old to pop the question to his 23-year-old lover. Flush with excitement, the two head to Vegas, get hitched at the Little Church of the West Wedding Chapel with the Everly Brothers in attendance, and settle into the French Quarter Casino, whose executive host, Harry Bellows, is an old friend. Life looks sweet, and it gets even sweeter after a brief, violent mix-up leads to Nolan and his bride’s getting comped to one of the French Quarter’s honeymoon suites. But all good things must come to an end, and soon Collins is asking whether Nolan and Sherry will survive a double-cross whose perpetrator plans to frame them for stealing the casino’s latest take and leave them dead—and, even if they do, how they’ll fare once they’ve encountered Cole Comfort’s brother, Daniel, a white-sheep loan officer who’s reluctantly agreed to kill Nolan on orders from his grieving mother. Nolan can’t compete with his acknowledged model, Donald E. Westlake’s dead-eyed thief, but fans who aren’t hopelessly besotted with Parker will find Nolan’s comeback as fleet and efficient as it is free of surprises.

No doubt about it: It’s great to see Nolan back in action.