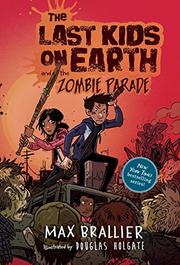 THE LAST KIDS ON EARTH AND THE ZOMBIE PARADE

From the Last Kids on Earth series, volume 2

Thirteen-year-old Jack Sullivan and his crew of monster-fighting besties are fresh off their victorious battle against the evil Blarg, but there’s no rest for the weary in the middle of a Monster Apocalypse.

First, Joe’s Pizza has become the local monster hangout. And second, the zombies seem to be disappearing. Thankfully, the white boy, his not-so-secret Latina love, June Del Toro, his African-American, science-nerd best friend, Quint, and pre-apocalypse bully–turned-ally Dirk, a large white boy who loves to garden, befriend a man-monster who might have the answers to everything. Equal parts humor, adventure, and warmth, the book offers fans of the series and new readers alike an entirely agreeable outing. Jack’s witty narration and Holgate’s pitch-perfect illustrations make for a terrific read that’s particularly well suited for middle-grade boys who might otherwise be reluctant to pick up a book. There are plenty of foul-smelling, brain-sucking monsters and gizmos and gadgets to delight, but at its core, this is a story about friendship. Orphaned at birth and raised by a foster family he describes as jerks, Jack has always longed for a family of his own. Now that he has one, the only thing scarier than the monsters is the thought of losing them.

An apocalyptic adventure with a whole lot of heart.