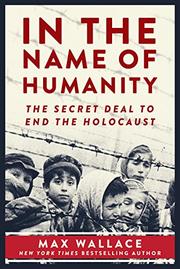 IN THE NAME OF HUMANITY

The Secret Deal to End the Holocaust

Beyond the well-known work of Oskar Schindler and Raoul Wallenberg, Wallace (The American Axis: Henry Ford, Charles Lindbergh, and the Rise of the Third Reich, 2003) sets out to tell the story of the staggering network built by a Swiss-based rescue group.

This small band worked tirelessly, giving of their lives and fortunes to save the Jews interned by the Nazis. Working with and against unbelieving ministers of Allied countries, Zionists and anti-Zionists, Orthodox and secular Jews, Catholics, outcasts, and even some Nazis, they saved tens of thousands of lives. Desperate attempts to convince the Allies to help—even to bomb railway lines to Auschwitz—met with nothing but frustration, as they were told that the priority was to win the war, not save lives. Even the Red Cross claimed that the Nazi treatment of Jews was an internal matter. The mutual suspicion and traditional divisions between secular and religious Jewish communities provided rifts that unfortunately often undermined some of their valiant attempts. Though many of the names will be unfamiliar to most readers—Recha and Isaac Sternbuch, Gerhart Riegner, Jean-Marie Musy, Joel Brand, Rudolf Kasztner—their work was indispensable, and the author brings them to well-deserved light. From physically saving refugees in Switzerland to providing false passports and visas to Italy or China, even a few to Palestine, small efforts grew into a larger, wider, and more desperate movement. In Slovenia, organizers hatched a plan to ransom prisoners, and the connection of a Finnish osteopath brought them to Heinrich Himmler, the architect of the Holocaust. Himmler knew, as many Nazis did but were terrified to admit, that the war was lost. Himmler attempted to work with them to close the camps, but his fear of Hitler was palpable. Throughout, Wallace introduces readers to a host of inspiring heroes, most of whom were quiet and unassuming yet intensely dedicated to saving European Jewry.

A riveting tale of the previously unknown and fascinating story of the unsung angels who strove to foil the Final Solution.