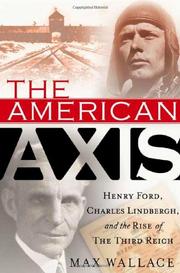 Henry Ford, Charles Lindbergh, and the Rise of the Third Reich

Whisper an antiwar sentiment today, and you’re branded a traitor. Hinder the Allied war effort and champion the Nazi cause, as did a captain of industry and a pioneer of aviation, and you’ll be remembered as a hero.

So Wallace, a researcher for Steven Spielberg’s Shoah Project, demonstrates in this eye-opening if sometimes circumstantial account of automaker Henry Ford’s and pilot Charles Lindbergh’s multifaceted dealings with the Hitler regime. Ford was singularly instrumental, Wallace charges, with Hitler’s rise; not only did Hitler and other Nazis credit their conversion to anti-Semitism in part to Ford’s scurrilous The International Jew, but Ford also funded the early Nazi party unstintingly and, knowingly or not, gave Nazi operatives access to manufacturing specifications and other documents at least until America entered the war. Hitler himself said, “I regard Henry Ford as my inspiration,” not least for providing a model of mass production for the Nazi killing machine. Direct evidence of Ford’s financial role in bringing Hitler to power is scanty, Wallace writes, “a significant amount of the [Ford Motor] company’s early days—particularly material pertaining to Ford’s anti-Semitism” having been carefully discarded. Lindbergh, famed for his transatlantic solo flight, brought pseudoscientific theories of eugenics to his own admiration for the Nazi regime, and the Nazis reciprocated by depicting the blond, blue-eyed Lindbergh as the exemplar of Aryan manhood. Strangely, by Wallace’s account, both men seemed mystified when the Roosevelt administration did not court their services at the outbreak of WWII, on which occasion Ford remarked, “The whole thing has just been made up by Jew bankers.” Though Lindbergh served as a consultant to Ford in the development of the B-24 bomber, he was unable to gain a military commission—and for good reason, inasmuch as even in 1945 he was publicly lamenting the destruction of Germany, a civilization that “was basically our own, stemming from the same Christian beliefs.”

A finely wrought, careful, and utterly damning case that ought to prompt a widespread reevaluation of both Ford and Lindbergh.