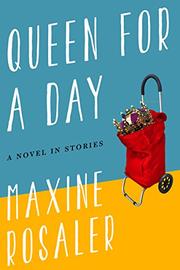 QUEEN FOR A DAY

This debut novel in stories circles around Mimi Slavitt, mother to an autistic son, with arcs into the lives of other mothers raising children with developmental disabilities in New York City.

The book starts around the time of Mimi’s son Danny’s diagnosis at age 4, in the shifting period when New Yorkers still used subway tokens but Starbucks were starting to pop up around town. It ends when Danny is in his early teens. Little changes with him in the intervening years; he remains in his own world, fascinated by nature and facts, uncaring of other people or social conventions. But Mimi’s experiences range wildly. She is at once loving and proud, anxious and outspoken, indefatigable and desperate—traits that repeat throughout her life as well as the lives seen elsewhere in the collection. “Two Mothers” shows Aviva Brodner preparing her son, Howard, for his bar mitzvah. She hopes with that event to distance sweet, yearning Howard from his association with Danny as one of the two weird kids in class. In the title story, Mimi tells of Amy, a woman who “cured” her autistic son only to have him return to form, and how parenting robs Amy of her other passion—painting. These stories afford the reader different interpretations of Mimi and, more significantly, different views of women coping with children who don’t fit easily into the world. The mothers (and only the mothers) constantly battle an uncaring school district for insufficient resources while dreaming futilely of escape. When telling her own tales, Mimi sounds like a messy Nora Ephron—neurotic, talkative, and often funny in her sudden observations. When glimpsed, the children are distinct and wonderful.

An engrossing and compassionate collection showing motherhood in its most unrelenting form.