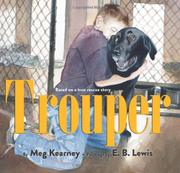 Trouper, a three-legged stray dog, narrates the story of his life to his new owner in this compelling, beautifully illustrated book based on a true rescue story.

Although the circumstances of Trouper’s early life are hard, readers feel hope, since they know from the opening lines that he is describing “[b]ack in the before time, / … / before the place you picked me out.” They will be deeply moved by Trouper’s poetic, sensory language and his keen observation; the boys on the street throw stones at the dogs because they “thought the world was mean, / and so they had to be.” In contrast, it is a boy with gentle hands who adopts Trouper after he and his mob are brought to the shelter—but not before Trouper nearly despairs, stating, “My heart was a cold, starless night— // until your face / shone through the bars / like a mini sun.” Lewis’ evocative watercolors capture the stark setting and the scrappy dogs, especially dear, noble Trouper at both his lowest moment and during his rescue—his adoption—secure in the boy’s embrace. After he describes the pleasures of his new home, readers at last see dog and boy running, leaving “five footprints in the snow.”

Sure to tug the heartstrings, this is a lovely and satisfying tale.