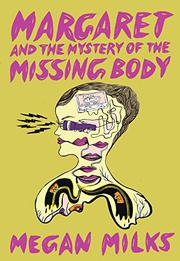 MARGARET AND THE MYSTERY OF THE MISSING BODY

This elaborately constructed novel begins with 16-year-old Margaret in her car, listening to Fiona Apple, obsessing about food, and sadly reminiscing about the club for junior detectives she led as a tween. Her one-time friends have long outgrown amateur sleuthing, but Margaret hasn’t found a new identity for herself since Girls Can Solve Anything disbanded. Margaret has become a mystery to herself. After this prelude, the narrative takes us back to a happier time, a time when the mysteries Margaret confronted were much easier to solve. “The Case of the Stolen Specimens” centers on the theft of rare butterflies from the local botanical garden. After beginning in a realist mode, Milks takes a hard left into science fiction. It turns out that the thief Girls Can Solve Anything has been hunting is using butterfly DNA to turn herself into a bug. The case that gives this book its title involves a client who wakes up to discover that she no longer has a body. When the novel shifts gears again, Margaret is in a residential treatment program for teens struggling with disordered eating. And, once again, a realist narrative opens up to the fantastic. The facility where Margaret is staying is haunted, and a ghost leads her and two other patients on a terrifying quest. The final portion of the text is, essentially, an essay explaining the novel. It’s here we learn that the protagonist we met as Margaret no longer identifies as a woman. What Milks presents here is thought-provoking, but the novel they’ve written never quite coheres as the project they describe. “What is the difference between the fantasy of anorexic body mastery and the magic of hormone-based transition? I don’t know,” Milks writes. It’s fine to not know, but it’s odd to append this very interesting question at the end of a novel where it might have been more thoroughly explored. There are a few moments in which we see Margaret struggle with her sexuality and question her gender, but those moments get trampled by distractions like a disembodied brain and a spectral suffragette. The ultimate problem is that the fantastical apparatus doesn’t help the reader understand the novel’s central character; instead, it pushes the reader further away from understanding.

A fascinating concept that might have been a terrific novel.