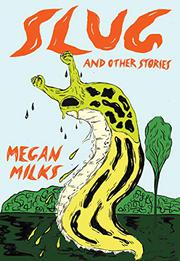 SLUG AND OTHER STORIES

Twinship, sexual relationships, parent-child relationships, and friendships are the subjects of this hypersexual and hyperconfrontational short story collection. The author pushes every boundary and taboo, exploring how a pairing can result in one person’s dominating another or changing for another. The opening story, “Slug,” establishes the themes of free discovery and creative sexuality. A woman has sex with—and is transformed by—a giant slug following a date with a disappointing man. Human-animal erotic pairings are explored further in “Wild Animals,” in which a VHS bestiality porno “infects” a character’s mind and sexual behaviors: “There, in that other realm, was a rhythm so fixed that bodies don’t need to be.”  Human-tech connections and imaginative pairings of body parts abound in daring tales that challenge certainties about gender, fantasy, and identity. Trans characters and transitions of all kinds are frequent subjects; characters’ genders and identities are malleable: “He and she can mean anything.” The author asks questions about queer communities and how they define themselves. These tales often allude to touchstones like Seventeen magazine, The Babysitter’s Club, My Little Pony, video games, and the Choose Your Own Adventure series. Milks uses the framework or style of the source as a scaffold, but their insights about relationships are fresh and original; these are stories about deep pain, shame, lust, and love. Speculative elements are frequent, as in “The Strands,” in which a woman’s former lover’s hair grows to cover an entire apartment. One of the most arresting tales is “Patrick Gets Inspired,” an autofictional examination of an author’s attempt to write Covid pornography. It deals with infection, consummation, and release: “Spit. Droplets. Breath. Vehicles of contagion. Objects of fear.”

Tender little stories that will make you gasp and squirm.