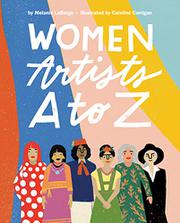 WOMEN ARTISTS A TO Z

Contemporary and historical female artists are showcased for younger readers.

The artists’ names aren’t presented in A-to-Z order. The alphabetical arrangement actually identifies signature motifs (“D is for Dots” for Yayoi Kusama); preferred media (“I is for Ink” for Elizabeth Catlett); or cultural, natural, or personal motives underlying artworks (“N is for Nature” for Maya Lin). Various media are covered, such as painting, box assemblage, collage, photography, pottery, and sculpture. One artist named isn’t an individual but rather the Gee’s Bend Collective, “generations of African American women in Gee’s Bend, Alabama,” renowned for quilting artistry. Each artist and her or their work is introduced on a double-page spread that features succinct descriptions conveying much admiring, easily comprehensible information. Colorful illustrations include graphically simplified representations of the women at work or alongside examples of their art; the spreads provide ample space for readers to understand what the artists produced. Several women were alive when this volume was written; some died in the recent past or last century; two worked several hundred years ago, when female artists were rare. Commendably, the profiled artists are very diverse: African American, Latina, Native American, Asian, white, and multiethnic women are represented; this diversity is reflected in their work, as explained via texts and illustrations.

A solid introduction to fascinating artists, some familiar, others less so.