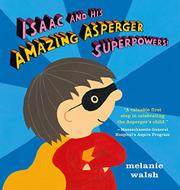 ISAAC AND HIS AMAZING ASPERGER SUPERPOWERS!

Isaac explains why he wears a mask and cape and sometimes has special needs.

Packaged between rainbow-striped endpapers, this purposeful monologue offers a mix of positive takes—“I’ve got special superpowers that make me slightly different from my brother and the other kids at school”—and coping strategies. Among these latter are looking at foreheads rather than directly at eyes, which makes him “feel scared,” and keeping personal comments “inside my head so that I don’t upset people.” In the big, simple illustrations, Walsh gives Isaac uniformly smiling pets and peers for company, and she shows him less than cheerful only once, when the buzzing of fluorescent lights “makes my ears really hurt.” At the end he explains that he has Asperger’s, “which is a kind of autism,” and closes by affirming that his brother understands him, “and now you do too!” That may be overstating the case, but Isaac comes off as less inscrutable than the children in Gail Watts’ Kevin Thinks (2012) or Davene Fahy and Carol Inouye’s Anthony Best (2013). That the book is aimed not at children on the spectrum but at their peers is made explicit in a jacket-flap note from the author, whose son has Asperger’s.

While simplistic, it’s a serviceable starter for discussions of spectrum disorders with younger neurotypical audiences.