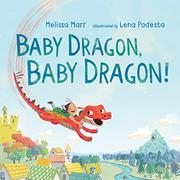 A bright red baby dragon flies around a village of the European past with a young child chasing after.

Readers first spot the child, cued as a girl with long pigtails, pitching hay into a wagon, but all of a sudden, she is in a castle with a sword at her side. She wears a sleeveless green tunic and gray leggings, and it is hard to tell who she is within the hierarchy of her world. She speaks to the dragon: “Baby dragon, baby dragon, what a fast flight!” Marr uses this admiring, repetitive, rhythmic phrasing throughout the story but lets readers down by following up not with a rhyme but with bland prose text: “Baby dragon, baby dragon, what a big climb! / You scale tall walls and go up so high.” The girl clearly enjoys keeping up with the fun-loving dragon, flying on its back, looking at its treasures, and even cuddling up in its nest, but the text is persistently pedestrian. There is a strong sense of movement in the cartoonlike illustrations, created with both traditional and digital media. The child protagonist is light-skinned; some diversity among the kingdom’s inhabitants is shown in an amusing feasting scene in which the dragon fastidiously eats with the very tip of its tail, a bib around its neck.