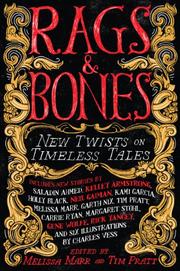 Inspired by sources as old as Edmund Spenser and as recent as William Seabrook, from authors entrenched in the literary canon and those considerably more obscure, this collection is an eclectic mix of sequels, retellings, homages, pastiches and even responses with only tenuous connections to the originals. While the tone varies from witty to poignant, from lush and sensual to dry and didactic, the stories share a darkly fantastic sensibility, often with a horrific undercurrent. Though told mostly from a male—and usually adult—perspective, they also exhibit a common concern with the limited choices available to women and minorities in patriarchal, Eurocentric cultures. Standouts include Neil Gaiman’s clever, biting crossover between “Sleeping Beauty” and “Snow White”; Holly Black’s reshaping of the lesbian subtext in Carmilla into the intense friendship of pre-adolescent girls; co-editor Marr’s savage and heart-rending updating of selkie legends; and Saladin Ahmed’s impassioned defense of the nameless Other so often caricatured as a fantasy villain. It seems likely that adults will be the most appreciative audience, as few teens will be familiar enough with the originals to catch the subtle resonances, and most of the themes and language are as mature as the characters.

A thoughtful selection of exquisite literary amuse-bouches; it will take a little work to connect teens with it, though.