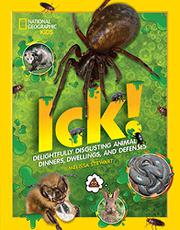 Ready for a slide through some of the animal kingdom’s more revolting behaviors? Cue the mucus!

Arrays of big, bright nature photos showing more than 50 creatures ranging from cute, fuzzy cottontails and baby pandas to the ever popular Pacific hagfish and evocatively named pustulated carrion beetle (not to mention—but let’s—the bone-eating snot flower worm) anchor this gleeful introduction to many of nature’s poop eaters, slime exuders, projectile vomiters, carrion recyclers, and butt squirters. As if it were necessary, regular sidebars offer “Extra Ick!” to a commentary punctuated by the occasional “Yuck!” or “Now, that’s disgusting!” Stewart happily brings on the gross as she trumpets the “Toxic Toots” of the beaded lacewing’s larva, buzzes over flesh fly maggots that eat out harlequin toads from the inside (“That’s right: In this scenario, the toad croaks”), and flings out stomach-churning facts about “vile vittles” and the many uses of spit. If most of the photos aren’t as explicit as the text, which may disappoint some readers, they do consistently provide riveting close-ups of the wild kingdom guaranteed to leave even the most committed animal lovers a touch queasy.

Riotous reading for students of snot flowers and fans of fecal facts.