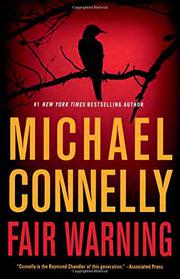 A first-rate case for Connelly’s third-string detective, bulldog journalist Jack McEvoy, who’s been biding his time since The Scarecrow (2009) as Harry Bosch and the Lincoln Lawyer have hogged the spotlight.

The consumer-protection website FairWarning can’t hold a candle to the LA Times, where Jack once plied his trade. The real problem this time, though, is that the cops come to Jack rather than vice versa, as a person of interest who had a one-night stand a year ago with Christina Portrero, whose latest one-night stand broke her neck. In fact, Jack quickly discovers, Tina was only the most recent among a number of women who died of atlanto-occipital dislocation—several of them erroneously listed as accidents, all of them clients of the genetic testing firm GT23. Why would sending out your DNA for genetic information put you at enormously increased risk of falling victim to a brutal killer who calls himself the Shrike? The answer to the question of how “predators now can custom-order their victims,” which lies in the DRD4 gene, is guaranteed to make even the most hard-bitten readers queasy. Throughout his pursuit of the killer, the LAPD’s pursuit of him, and his unwilling partnerships with fellow journalist Emily Atwater and former FBI agent Rachel Walling, Jack works the case with a dogged professionalism, a mastery of detail, and a scarred but oversized heart that puts most of his police procedural cousins to shame.

Darkly essential reading for every genre fan who’s ever considered sending a swab to a mail-order DNA testing service.