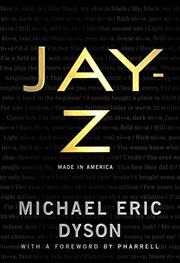 The celebrated public intellectual offers a slim volume on an American musical icon.

For readers who only know Jay-Z as Beyoncé’s husband, the latest by Dyson (What Truth Sounds Like: Robert F. Kennedy, James Baldwin, and Our Unfinished Conversation About Race in America, 2018, etc.) is a serviceable primer. However, for readers familiar with Jay-Z’s music or role in popular culture, this brief book has little to offer. The publication coincides with the rapper’s 50th birthday, and it reads as if it was rushed to make the date. The chapters are disorganized and consist largely of riffs that have often tangential connections to his life or work. Dyson’s interests are wide-ranging, and some of his digressions are worthwhile in their own right. Ultimately, though, there’s too much filler in a book that needed more material. It’s no surprise that many of the tangents rehash older writings for which the author is already well known, and he also engages in excessive name-dropping, cringeworthy poetic affectations, and an attitude that sometimes feels condescending to readers and to hip-hop culture. In a long section on the late Nipsey Hussle, Dyson describes a time he sat by the rapper on a flight. As the two men “had an epic conversation,” Nipsey “brought up the psychologist Abraham Maslow.” This is a typical non sequitur meant to suggest to readers that Nipsey is worthy of our consideration because he is intelligent. The author frequently uses the same approach with Jay-Z, noting, for example, that the rapper uses many of the poetic devices employed by Robert Frost, Rita Dove, and other poets; of course, countless rappers use the same tactics. Dyson is usually far more insightful that this, and readers should turn to Julius Bailey’s Jay-Z: Essays on Hip Hop’s Philosopher King or Jay-Z’s own book, Decoded, a masterpiece of music memoir. Pharrell contributes the foreword.

Jay-Z deserves an in-depth study. This is not it.