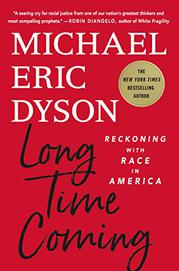 Reckoning With Race in America

A scholar of race looks to the future with hope.

In his latest, an apt follow-up to What Truth Sounds Like and Tears We Cannot Stop, Dyson, a Baptist minister, sociology professor, and contributor to the New York Times and the New Republic, offers a sweeping overview of racism in America through the pretext of letters to seven victims of racial violence: Elijah McClain, Emmett Till, Eric Garner, Breonna Taylor, Hadiya Pendleton, Sandra Bland, and the Rev. Clementa Pinckney. Cellphone videos have made such violence shockingly public, stoking widespread anguish: George Floyd’s death, in particular, “struck a nerve.” Although Dyson acknowledges that “something feels different,” he asks, “how far are we willing to go? Are we prepared to sacrifice tradition and convention for genuine transformation?” Each letter offers the author an opportunity to expand upon the complexities of Blacks’ experience of hatred and oppression and to offer tempered suggestions for change. In his letter to Garner, for example, Dyson acknowledges that “Black bodies are still an object of scorn and derision” and “of nearly unconscious rage that rattles the cavernous egos of some men who think themselves mighty because they sport a badge and a gun and have referred swagger.” To counter what he calls the “blue plague,” the author proposes reconstructing police administration “so that the chain of command is shared with multiple agencies of safety and protection” as well as “redesign[ing] the architecture of police units and dispers[ing] their duties across a number of agencies while decentralizing both their composition and their authority.” Writing to Pendleton, killed when she was 15, he shares the “righteous anger” her death provoked, but he warns against responding with cancel culture, which he likens to fascism and sees as “a proxy for white supremacy.” In his letter to fellow clergyman Pinckney, Dyson reveals his enduring yet cautious faith in humanity.

A timely, fervent message from an important voice.