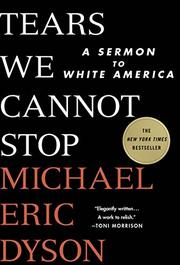 A Sermon to White America

The provocateur-scholar returns to the pulpit to deliver a hard-hitting sermon on the racial divide, directed specifically to a white congregation.

Though Dyson (Sociology/Georgetown Univ.; The Black Presidency: Barack Obama and the Politics of Race in America, 2016, etc.) may be best known for his writings on race and culture, he is also an ordained minister, and it is this role and voice he assumes in his latest manifesto. The book is structured as a religious service, and its cadences practically demand to be heard rather than read. Here is what he calls “a plea, a cry, a sermon, from my heart to yours,” because “what I need to say can only be said as a sermon,” one in which he preaches that “we must return to the moral and spiritual foundations of our country and grapple with the consequences of our original sin.” Not that the faith Dyson espouses is specifically or narrowly Christian or directed solely to those of that religion. In his recasting, the original sin might be seen as white privilege and black subjugation, addressed throughout as a white problem that white people must take significant steps to confront—first, by accepting that “white history disguised as American history is a fantasy, as much a fantasy as white superiority and white purity. Those are all myths. They’re intellectual rubbish, cultural garbage.” The author demands that readers overcome their defensiveness and claims to innocence and recognize how much they’ve benefitted from that myth and how much black Americans have suffered from it—and continue to do so. Dyson personalizes the debates surrounding Black Lives Matter and the institutional subjugation of black citizens by police. He also proposes a form of reparations that is individual rather than institutional, that conscientious white people might set up “an I.R.A., an Individual Reparations Account” and commit themselves to the service of black children, black prisoners, black protestors, and black communities.

The readership Dyson addresses may not fully be convinced, but it can hardly remain unmoved by his fiery prose.