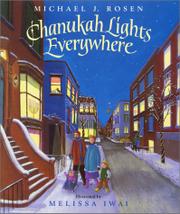 This Chanukah offering from Rosen (Elijah’s Angel, 1992, etc.) attempts to find metaphoric comparison for the lights of the Chanukah menorah. But while Angel soars, Lights falls flat. The metaphors are forced, the language stilted, and Iwai’s (Night Shift Daddy, 2000, etc.) illustrations, while colorful and appealing, are flawed. On the first night of Chanukah the moon is like a flame. On the second night two headlights from grandpa’s car resemble the Chanukah lights, defying the laws of parallel parking as well as the laws of physics by shining directly into the living room of the family’s brownstone walk-up. On the third night, cousins come to visit and the young narrator switches on the lamps outside, “and suddenly there are three more lights, like in our menorah!” On the fifth night, five silver dollars shine like lights. By the seventh night, the family finds a Chanukah analogy in the seven bulbs burning in the windows of a Christian friend. Dad declares that “Chanukah is also about the joy of different religions sharing a street.” So far, the story has revealed little about the meaning of Chanukah. Iwai’s illustration for this spread shows a suburban neighborhood, despite already having depicted the family’s street in the heart of a neighborhood that looks a lot like Brooklyn. A note following the text explains the origins of the holiday. Disappointing. (Picture book. 3-5)