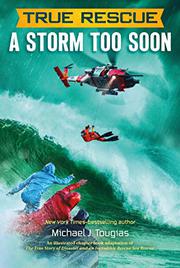 A STORM TOO SOON

From the True Rescue series

An adaptation of the 2016 young readers’ edition of the 2013 book for adults, all of the same title, with the addition of black-and-white illustrations.

Aimed at a younger readership than the earlier adaptation, this version further simplifies the plot but not the language, since some of it is taken nearly verbatim from the 2016 story. Tougias has highlighted the action part for this adaptation, presenting a much shorter version that forgoes character development and emotional depth. In this tale based on a true event, three men set out from Florida to sail to France in May 2007. They haven’t met prior to the planned crossing, but the crew, Rudy and Ben, are impressed with the 44-foot Sean Seamour II and its captain/owner, JP, who is experienced and well prepared (a point that comes across better in the 2016 book—this one makes him seem somewhat incompetent). Unfortunately, all the preparation in the world doesn’t help the sailors when they collide with a fierce storm. The yacht is overcome by the incredible 80-foot waves, and the men take to the tiny inflatable life raft, hoping for rescue. Nautical terms and land terms are interchanged: Sometimes it’s “knots,” sometimes it’s “miles per hour”; a character’s “raincoat” becomes “foul weather gear”—inconsistencies that are confusing. Geyer’s black-and-white woodcut-style illustrations, reminiscent of early illustrated action stories, bring the narrative into the realm of timeless adventure stories. Series companion The Finest Hours, an adaptation of the 2014 young readers’ edition of Tougias and Casey Sherman’s 2009 title for adults, publishes simultaneously.