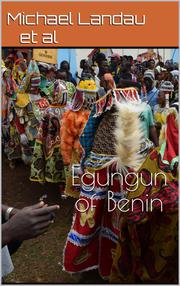 A debut photography book explores a religious festival in Benin.

Landau takes readers on a journey to the African town of Sakete in 2017. Every three years in Sakete, an event takes place among the Yoruba people. For some 16 days, individuals in trances dressed in full-body costumes (no skin is shown to the outside world), who are known as Egungun, make their way around the town. The Egungun have retinues that can range from one to 100 people. Several Egungun dance or are accompanied by drummers and singers. Some Egungun are violent, chasing and whipping bystanders with atoriwhips. Others are peaceful, bestowing blessings or predictions. The book catalogs 130 Egungun with photographs by the author and biographical sketches. For instance, in 2017, Egungun Elègba sported a vibrant yellow and red costume (most of the participants also have pictures from 2011 when many of them looked quite different). This Egungun was “instituted by the sages to invoke the benefits of the deity called Elègba who is appealed to” for protection “against evil spirits that lead men to misunderstandings.” For those unfamiliar with Yoruba or Egungun practices, the book has a great deal to offer. The Egungun costumes are striking. Whether they are brightly colored with images of animals or comparatively drab, they make for a memorable presence. To simply look at the many photos is to see what a bustling event this festival must be. That all of the Egungun have their own personalities and purposes provides further depth to the images. Still, several aspects of the Egungun backgrounds can be lost on the uninitiated. For instance, many backstories involve people consulting the Ifa oracle. How they created “an outfit of the kind recommended by the Ifa oracle” is unclear. Likewise, the author’s personal experiences warranted further elaboration. He mentions leaving the festival early in 2017 for safety reasons (and advises readers to by no means attend the celebration without a chaperone), though the specifics are not mentioned. Nevertheless, the volume provides an engrossing experience.

This work delivers vivid images and a structured and illuminating account of a momentous event.