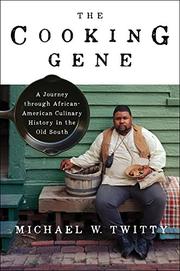 A Journey Through African-American Culinary History in the Old South

Food historian Twitty, creator of the Afroculinaria blog, serves up a splendid hearth-based history, at once personal and universal, of the African-American experience.

The author accounts himself a citizen of the Old South, “a place where people use food to tell themselves who they are.” It is also, he continues, a fraught place where food controversies—whether to put sugar and not molasses in cornbread, say—pile atop controversies of history, all pointing to the terrible fact of slavery. Twitty’s book is not just about food, though it certainly covers the broad expanse of African-American cooking over the centuries and how it shaped the larger Southern American culinary tradition. The author delights in the “world of edible antiques” that his researches take him into, a world requiring him to think in terms of gills, drams, and pecks. Twitty also traces his own family history, beyond the eight or so generations that carry documents, to places all over the world: a white ancestor here, an Indonesian by way of Madagascar forebear there, Native Americans and West Africans and Anglos meeting in bloodstreams and at table. On all these matters, the author writes with elegant urgency, moving swiftly from topic to topic: on one page, he may write of the tobacco economy of the Confederacy, on another of the ways in which “the food of the Chesapeake grew legs as the culture of the Upper South was forced to branch out” beyond the Appalachians and Mississippi into new territories, such that “turkey with oyster dressing on a Maryland plantation became turkey with freshwater clam and mussel sauce on a slaveholding Missouri farmstead.” Drawing on a wealth of documentary digging, personal interviews, and plenty of time in the kitchen, Twitty ably joins past and present, puzzling out culinary mysteries along the way—e.g., “chickens got served to preachers because chickens had always flounced in the hands of African priests, and nobody remembered why.”

An exemplary, inviting exploration and an inspiration for cooks and genealogists alike.