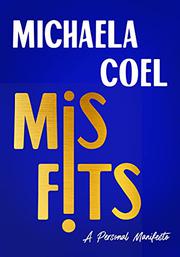 At the 2021 Emmy Awards, where she was honored for I May Destroy You, Coel memorably said, “Write the tale that scares you, that makes you feel uncertain, that isn’t comfortable. I dare you.” It wasn’t her first such exhortation. This short book encapsulates her 2018 MacTaggart Lecture before an industry audience at the Edinburgh TV Festival. The author places her success in British TV against a background of “rape, malpractice and poverty” along with a constant undercurrent of racism and sexism. Another theme is the necessity of shaping one’s own life through hard effort. Growing up in a poor immigrant household in the literal shadow of a leading London bank, she enrolled in a neighborhood theater program for low-income children—“for free. Free was cheaper than childcare, and at eight years old I was part of Bridewell Youth Theatre. The only Black person.” She took the work seriously, attending drama school and, though suffering the usual disappointments (taking the lead in Lysistrata, for instance, but in the London equivalent of an off-off Broadway theater that no agent would bother visiting), she blossomed. Finally offered a TV show, Coel met no end of small insults, but she overcame each obstacle. She accepted being one of the industry’s historically excluded “misfits” (another theme). Lately, she writes, “channels, production companies and online streaming services have found themselves scrabbling for misfits…aware they might be very profitable.” The author counsels all storytellers and creatives to be bravely transparent about their worst experiences and bitterest realities, ground from which art can grow, and to remember a sage bit of advice she once read: “There are as many perspectives as there are people.”

Lovely inspiration for creatives—and indeed anyone seeking to make sense out of life.