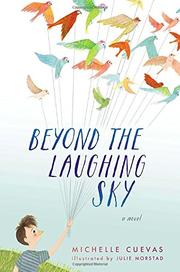 BEYOND THE LAUGHING SKY

Nashville, who has qualities both human and birdlike, feels compelled to follow his avian destiny.

The storytelling is folksy, poetic and seductive, beginning, “Nashville and his family lived in a house perched in the branches of the largest pecan tree in the village of Goosepimple.” Little by little, readers learn how Nashville, unlike his adoring younger sister, Junebug, was hatched from an egg. He has a beak and feathers but, alas, no wings. Morstad’s illustrations support the funnier details, including the dinner-table “perch swings” that Nashville’s mother has installed “to make Nashville more comfortable” as he eats his seeds while his family eats typical human fare. The deadpan humor of Flat Stanley is invoked when Nashville’s parents take him for his annual physical examination—at the veterinarian’s office. In added playfulness, said vet is Dr. Larkin; the village teacher is Miss Starling. This allegory of growing up and finding one’s figurative wings is told sweetly and without great angst, despite inclusions of such subjects as school bullying and Nashville’s empathetic but highly illegal pet-store shenanigans. Yet there is an underlying melancholy throughout, somewhat mitigated by the possibility of future communications from the appealing bird-boy.

“There’s things you’ve seen and things you may not have, but there ain’t nothing that’s impossible, sugar,” says a village widow; readers will end the book with a new sense of possible.