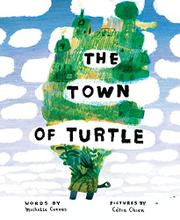 THE TOWN OF TURTLE

A solitary turtle creates a community atop his shell.

According to the lyrical text, “Turtle lived in a part of the world as empty as a bird’s nest in December.” The accompanying double-page illustration, created in acrylic, paper, and pencil collage, shows a small gray planet, about 10 times larger than the turtle perched on it, floating in a dark sky surrounded by a sea of stars. With only his shadow to talk to, Turtle is lonely. He spends most of his time inside his shell, dreaming of a happier life. Having pictured a “better home,” he resolves to build it. Across several pages, Turtle (somewhat disconcertingly) slips out of his shell to paint, construct, and expand an elaborate environment on it. Blocky shapes, occasional splashes of vivid color, and unusual juxtapositions create a dreamlike quality that suits the fanciful premise. As he rests from his labors, new residents appear. “A painter, a sailor, and a ballerina came first.” These anthropomorphic animals are followed by an array of others representing an eclectic variety of occupations. A gatefold that requires a 90-degree turn of the book shows Turtle’s delight when he wakes to discover the town atop his shell is inhabited, but the resolution may seem less than satisfying since the turtle and the new arrivals don’t truly interact.

Though thoughtful, thought-provoking, and filled with engaging language, this allegorical tale may struggle to find an appreciative audience.