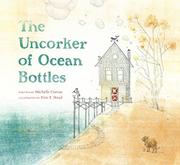 THE UNCORKER OF OCEAN BOTTLES

A man who delivers messages sent via ocean bottle longs for a message of his own.

With his pale skin and expressive eyebrows, the otherwise nameless Uncorker of Ocean Bottles, a white man who could be any age from young adult to elderly, is the very picture of quiet, determined, and lonely. How he came by his job isn’t told, but it is clear he takes it seriously, understanding the importance of the communications he brings. Cuevas’ poetic language plays with meter and words, as when he contemplates the improbability of receiving a message of his own: “But he still would have liked it just the same.” Stead’s illustrations in woodblock, oil pastels, and pencil seem to enfold her subject. His cat comes along on some of his missions, while various birds of sea and shore appear along his way like guiding spirits in the sun or rain or snow. When a message—an invitation to a party at the seashore—arrives with no definite sender or recipient, the Uncorker shares it with several people—and then goes himself. The people of the town, dark- and white-skinned neighbors gathered on the beach, suggest a community that perhaps already knows and certainly embraces him.

Readers will find both consolation and encouragement on every visit to this emotionally resonant, evocative story.