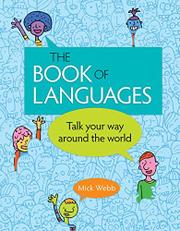 THE BOOK OF LANGUAGES

Talk Your Way Around the World

With just a bit of practice children will come away from this quick but sweeping linguistic look-see able to exchange greetings and a “How are you doing?” with anyone (almost) anywhere in the world.

Following a dash past language’s origins and families, Webb introduces 21 tongues—literally, as signed languages are clumped with semaphore and other codes in a mop-up chapter at the end. At one double-page spread per language, each is given a thumbnail history, a linguistic map, translations of the numbers one through 10, pronunciation notes and a set of conversational words or phrases from “Hello” to “I’m fine, thank you” or, conversely, “Not so good.” He also tacks on an alphabet (Pinyin for Mandarin Chinese, Devanagari script for Hindi-Urdu) and, in catchall boxes on each spread, comments on scripts, loan words, and one or two distinctive orthographic or grammatical features. Including English, 10 of his selections are European languages, but he also tucks in a few choices from elsewhere such as Quechua and Zulu plus, in passing, samples at least of Esperanto, Klingon and even “Textese,” LOL. Lest he be accused of leaving anything out, the author closes with a glance at various forms of animal communication.

Eurocentric, not to mention overly ambitious—but being able to say some variant of “Not so hot” in Belarus, Brazil or any point between has to count for something.