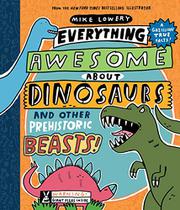 EVERYTHING AWESOME ABOUT DINOSAURS AND OTHER PREHISTORIC BEASTS

From the Everything Awesome About… series

A cartoon history of dinosaurs and contemporary creatures, largely hand lettered and (mostly, anyway) colored inside the lines.

Moot the titular hyperbole may be, but it does capture the tone as Lowery sandwiches a populous parade of very simply drawn dinos between a history of prehistory and a roundup of diverse topics, from what paleontologists do to sets of dinosaur jokes and “A Few Kinda Weird (and Unlikely!) Dino Extinction Theories.” Jokes and gags (“Why did the Archaeopteryx get the worm?” “Because it was an early bird!”) are scattered throughout along with side remarks (“Not another mass extinction!”), as are identifying labels with phonetic pronunciations (Gorgonopsia: “GOR-ga-NOP-see-a”) and cogent if dude!-ish observations: “These small weirdos…had one long claw-thing for catching stuff to eat”; “More time passed between Stegosaurus and T. Rex than the time between Velociraptor and microwavable pizza!” Better yet, though true dinosaurs hold the spotlight, flying and marine reptiles, early mammals, and other fabulous early fauna take such frequent star turns that along with infobites galore, readers will come away with a fairly sound understanding of just how dinosaurs fit into the whole history of life on this planet. Human figures of diverse hue occasionally step into view to offer comments or wisecracks.

A manic but solid series kickoff.