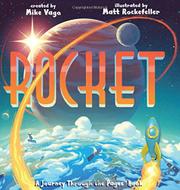 A Journey Through the Pages Book

A toy rocket propelled along a winding slot invites young astronauts to sample the wonders of outer space.

As in Vago and Rockefeller’s Train (2016), it’s all about the gimmick: a continuous slot cut into the heavy board pages that allows the small plastic vehicle (a retro-style rocket ship, here) to be pushed or pulled across each scene up to the edge and then around the edge to the next opening. Illustrating the generic rhyme (“Stars spin around in a cosmic race / Exploring the mysteries of outer space”), Rockefeller fills the starry firmament with flashes of light as the rocket soars past a crowd of glowing planets, winds its way through a thick field of “rocks,” pursues a comet, navigates a twinkling nebula, then swoops around a supernova to a die-cut hole that leads back to the first spread. The rocket is reasonably secure in its slot, but it can be reinserted easily enough should it fall (or, more likely, be pulled) out. The publisher suggests an age range of 4 through 8, likely in acknowledgment of the potential choking hazard the rocket ship poses, but the brevity and blandness of the text are unlikely to appeal to most in that range. Aside from a group of tiny figures watching the initial liftoff there are no people in the pictures.

Ephemeral, though the interactive feature will likely prompt one or two voyages before the rocket flies off into oblivion.