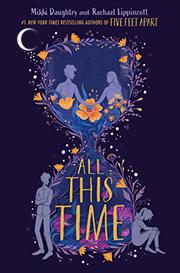 A modern-day fairy tale about two teenagers suffering from loss who find healing in one another.

Despite the ups and downs in their relationship, Kyle and Kimberly have always made up, and Kyle looks forward to attending college together after graduation. But on the night they should be celebrating, Kimberly confesses that she has committed to a different college and breaks up with him. As they argue, their car crashes, and Kyle later wakes up in the hospital and learns that Kimberly is dead. In his grief, Kyle blames himself for her death. He struggles to leave his bed most days, ignores calls from his and Kimberly’s best friend, Sam, and has visions of Kimberly and life before the accident. One day, while visiting Kimberly’s grave, he meets Marley, a girl who likes telling stories and is mourning the death of her twin sister. Predictably, their natural affinity for one another evolves into romance. It is unfortunate that Kyle essentially moves from one romantic relationship to another on his journey to better understanding himself and his co-dependence on those closest to him, although his gradual development into a more considerate person redeems him. The pacing remains even until the critical plot disruption, resulting in the rest of the story feeling disjointed and rushed. All characters are White.

For readers in need of a happy ending but not much else.