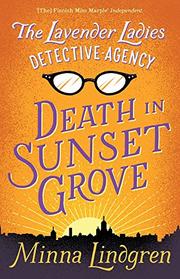 Two elderly women battle stereotypes and neglect in their fight to stay alive.

Siiri Kettunen and Irma Lännenleimu—who live in neighboring apartments in Helsinki’s Sunset Grove senior living home—decide on a whim to investigate some of the strange happenings there by forming The Lavender Ladies Detective Agency. Tero, the cook at the home, was recently found dead, and Siiri wants to know what happened. But that’s not the only thing that disturbs her. Personal belongings vanish, more pills are prescribed than seem necessary, and the clients are always getting billed for things they didn’t order. Even though the Lavender Ladies are in their 90s and perhaps forgetful, Siiri still feels something’s wrong. A war veteran is assaulted in the shower, and when his friend Reino complains, he’s hauled off to the dementia ward. Mika Korhonen, one of the young men wearing Hell’s Angels leather jackets at Tero’s funeral, helps the ladies while pursuing his own investigation. As Irma’s complaints about the home escalate, so do her medications, and she’s soon sent to the dementia ward. Left on her own, Siiri continues to ride the trams to get away from the home and stoke the memories of her life when she had one. When Siiri’s own dosage is increased, she hides the pills instead of taking them and, with Mika’s help, hatches a plan to free Irma from the dementia ward. Siiri’s only daughter is in a convent and Irma’s large family rarely visits, though they’re all too eager to divvy up her possessions and sell her apartment. So Siiri fights her own health problems and failing memory to help her friend and herself to escape the stifling world of Sunset Grove.

A sometimes-amusing but often disturbing indictment of how the elderly are neglected, ignored, and treated like children by the powers that be and consigned to homes that do little to enrich their lives and may even hasten their deaths.