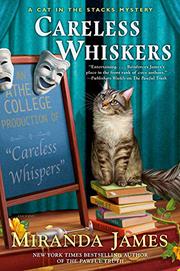 An impossible actor’s career ends when he dies midperformance, leaving a cast and crew who would have been all too willing to have done the deed.

Charlie Harris and his feline sidekicks, Maine coon Diesel and kitten Ramses, are all excited that Charlie’s daughter, Laura, and her husband, Frank, will be headlining Athena College’s spring production as lead actress and director in a homegrown new play, Careless Whispers. Laura was excited too until the male lead, who had to bail suddenly, is replaced by someone she knows all too well: Luke Lombardi. Laura’s had run-ins with Luke in the past and knows that he’s a drama queen in all the wrong ways. When Luke shows up in Mississippi, Charlie and his partner, Helen Louise Brady, are suitably unimpressed with his imperious attitude and clueless mini-entourage, but both figure there’s little to worry about until a string of pranks seems to escalate to Luke’s onstage murder. Though Charlie is concerned that Laura’s dislike of Luke might point to her as a suspect, c’mon! Chief Deputy Kanesha Berry, whom Charlie’s earlier investigations (The Pawful Truth, 2019, etc.) have made something of a family friend, doesn’t think Laura is guilty either, though she does have to follow procedure and question anyone with means and motive. While there aren’t many folks in the means category, Luke’s volatile and narcissistic manner has heaped the motive category with suspects—and can anyone blame them? It may all come down to unraveling the mystery behind the identity of the playwright, Finnegan Zwake, a pseudonym no one had thought to question until Charlie decides he can’t help but, once again, get involved.

Like her cast, James gets in a little more drama for a lively continuation of her series.