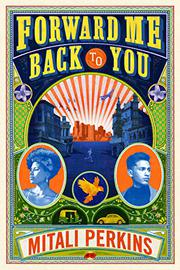 FORWARD ME BACK TO YOU

A summer church trip to Kolkata allows two American teens to serve, grow, and heal their own suffering in unexpected ways.

Katina King is a 16-year-old Brazilian jujitsu champion, a scholarship student at an elite Oakland school, and the brown-skinned, biracial daughter of a single white mother. After a male student assaults her, Kat’s anxiety, rage, and anguish disrupt her focus on winning matches and applying to college. Eighteen-year-old Robin Thornton was adopted as a toddler from an Indian orphanage by wealthy white Bostonians. He can’t seem to find true belonging or be more than a rudderless sidekick to his white jock friend. When Kat’s mother sends her to Boston for a break from Oakland, the teens meet, traveling to Kolkata with their pastor to work with survivors of child trafficking. Kat decides to teach the young women how to fight while Robin, now going by Ravi, hopes to find his birth mother. But they learn the hard way that they must first earn the trust and respect of those they serve and that service may be very different from what they imagine. Perkins (You Bring the Distant Near, 2017, etc.) celebrates Christian faith, superheroes, and Kolkata life through the interleaved perspectives of sympathetic and earnest protagonists and in simple language that speaks straight to the heart.

A hymn to faith, friendship, and social justice, sung by gentle men and strong women of many colors and ages.