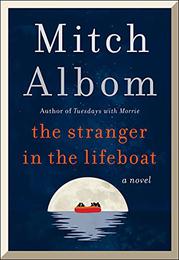 THE STRANGER IN THE LIFEBOAT

An inspirational novel about a disaster and an answered prayer by the author of The Five People You Meet in Heaven (2003).

What if you call out for the Lord and he actually appears before you? Days after billionaire Jason Lambert’s luxury yacht Galaxy suddenly sinks in the North Atlantic with many illustrious passengers aboard, a few survivors float in a life raft. Among them is Benji, a deckhand who narrates the ordeal in a notebook while they desperately hope for rescue. Lambert is a caricature of a greedy capitalist pig who thinks only of himself and his lost ship and mocks Benji as “scribble boy,” but the main character is a young stranger pulled out of the water. “Well, thank the Lord we found you,” a woman tells him. “I am the Lord,” he whispers in reply. Imagine the others’ skepticism: If you’re not lying, then why won’t you save us? Why don’t you answer our prayers? I always answer people’s prayers, he replies, “but sometimes the answer is no.” Meanwhile, the ship’s disappearance is big news as searchers scour the vast ocean in vain. The lost survivors are surrounded by water and dying of thirst, “a grim reminder of how little the natural world cares for our plans.” Out of desperation, one person succumbs to temptation and drinks ocean water—always a bad mistake. Another becomes shark food. The Lord says that for him to help, everyone must accept him first, and Lambert, for one, is having none of it. The storyline and characters aren’t deep, but they’re still entertaining. A disaffected crew member might or might not have sunk the ship with limpet mines. And whether the raft’s occupants survive seems beside the point—does a higher power exist that may pluck believers like Benji safely from the sea? Or is faith a sucker’s bet? Lord knows.