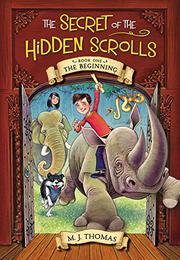 From the The Secret of the Hidden Scrolls series

An ancient scroll transports two modern children and a dog back to witness the biblical Creation.

Great-Uncle Solomon says he has a jarful of scrolls that “prove the Bible is true.” A midnight venture into his library leaves white Peter, 9, his adopted, Chinese 10-year-old sister, Mary, and their unusually smart dog, Hank, floating in a dark but not airless void until a big voice calls out “LET THERE BE LIGHT.” As similar all-cap commands bring day, night, water, and the rest, white-robed Michael arrives in a boat, warns that Satan lurks nearby (“I have a feeling that he is going to try to mess things up here”), and tells them that they have seven days to guess the meaning of the scroll’s secret Hebrew message or they’ll be stuck. When the great serpent shows up he gets a karate kick to the face from Mary, after which the children watch the “first man” (white, in the drawing) rise and name the animals (Hank gets to be “dog”). Peter translates the scroll’s message (“GOD CREATED EVERYTHING”) just in time and brings the travelers back to hear from their great-uncle how God kicked the first man and woman out of Eden but will “fix everything someday.” How? Repeated oblique mention of a lion (the only remotely subtle thing about the tale) might furnish a hint. Book 2, Race to the Ark, publishes simultaneously. Howells’ cartoon illustrations (many not seen) are as straightforward and artless as the text.

First of what promises to be a highly selective but at least not humorless set of introductions to biblical events.