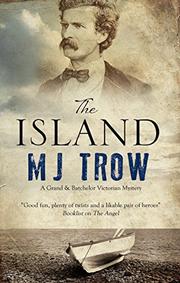 The surprise engagement of enquiry agent (and ex–Civil War captain) Matthew Grand’s little sister, Martha, provides an excuse for him to take a holiday and bring fellow sleuth, ex-journalist, and thoroughly British James Batchelor to Rye, New Hampshire, for the wedding. Although the best that Martha and Matthew’s devoted nurse can say about the groom is that he’s handsome, she knows that for Martha, the wedding is coming not a day too soon. At the elegant prenuptial dinner party in the Grands’ seaside home near the Isles of Shoals, Martha insists on wearing tightly laced stays to hide her expectancy from her groom, her parents, her uncle Josiah (who’s probably too drunk to notice in any case), Isles of Shoals native Celia Thaxter, and Mark "Uncle Sam” Twain. The party is disrupted when Martha faints from her stays, her mother faints from the surprise arrival of Matthew’s seafaring cousin, and Martha’s matron of honor faints when she sees her maid with a bashed-in head. Matthew and James, who find the corpse first, miraculously manage to hide the unfortunate event and close off the crime scene until after Martha’s wedding. The nearest police are in Boston, and they’re so slow to respond that Matthew and James undertake the interrogations of the houseguests, at least until Celia trips over another corpse with a smashed skull and finally gets the attention of the Boston police chief. But the worst is yet to come: a beacon summons detectives and suspects alike to the island of Smuttynose, where the lighthearted tone is darkened by a brutal scene inspired by a true-life crime.

Although Trow (The Angel, 2016, etc.) puts modern slang into the mouths of his 19th-century characters and seems less consistently interested in history than in his other series, he’s still good for a witty and clever tale.