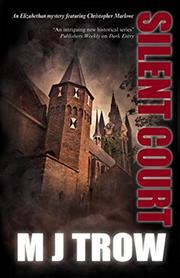 In a country rife with the prospect of war, Kit Marlowe is pressed into service for Queen Elizabeth as an amateur spy. His mission: to reach the Netherlands to offer his assistance to William the Silent, who has been even more silent since he was attacked and remains in a virtual coma. To achieve his goal, Kit joins a traveling band of Egyptian players whom Constable Joseph Fludd is chasing out of the country in connection with a possible murder charge. Though different by birth from his new companions, Kit blends in well with his new crowd, telling stories and charming the women of the group. When the Egyptians end up at the house of Dr. John Dee, the queen’s magus, Kit is concerned that his old friendship with the doctor will be discovered. But that is apparently the least of his concerns. Tragedy strikes, and everyone, including Kit, is suspected of foul play. Now the scholar-turned-spy must also take on the role of investigator while insuring that his cover as a harmless traveler remains intact.

History buffs amused by the conceit of Marlowe’s many professional hats can have the additional fun of pouncing on minor historical anachronisms. For those who aren’t ardent fans of the era, however, the latest from Trow (Lestrade and the Ripper, 1999, etc.) might as well be ancient history.