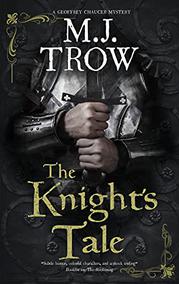 Geoffrey Chaucer turns sleuth to solve the murder of the Duke of Clarence.

In the middle of the 14th century, the well-educated Chaucer, not yet a renowned poet, earns a comfortable living as Comptroller of the King’s Woollens. When Lionel, the Duke of Clarence, suddenly dies, Sir Richard Glanville summons Chaucer to court to assist with the funeral arrangements. Lionel had already received a bit of unearned notoriety as the brother of Edward the Black Prince. Now Chaucer arrives to find a bizarre circle of mourners, including Lionel's viperish widow, Lady Violante; her brother, Giovanni Visconti; and Lionel’s new chaplain, Clement, whom no one much likes. It seems also that gold digger Blanche Vickers paid Lionel a visit on the afternoon of his death. Chaucer’s dim initial view of this group is confirmed when he visits salty washerwoman Joyce, an old friend brimming with court gossip. When Joyce takes custody of Lionel’s beloved wolfhound and gives Ankarette some of Lionel’s wine, as he was wont to do, the dog dies. Chaucer’s realization that Lionel was poisoned turns the circle of mourners into a rogues’ gallery of suspects he investigates with the help of Glanville and Joyce. Trow, whose Kit Marlowe stories have proven his ability to make historic characters feel contemporary and relatable, drops names like Becket, Canterbury, and John of Gaunt as if they were modern celebrities and gives his second-string historic characters vivid personalities. Another murder adds urgency to the investigation.