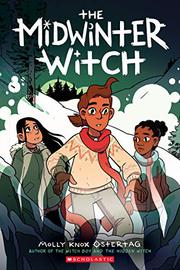 Will Aster, accepted as a witch by his immediate family, find that approval with his extended family? And does Ariel, welcomed into the Vanissen fold, even want a family?

As the ward of the Vanissen family, Ariel’s now being trained in witchcraft, and in a world in which magic is passed down and learned within families, this should be a wonderful thing. But orphaned Ariel chafes against magical traditions and the emphasis on family, a response that appears to be the result of her understandable fear of abandonment and intimacy. Added to this are nightly dream visitations from a woman named Isabel Torres. Claiming to be her aunt, Isabel plants doubts about the Vanissens’ acceptance and feeds Ariel’s anti-traditionalist leanings. Meanwhile, the Midwinter Festival—an annual magical extended family reunion—is coming, and Aster wants to compete in the Jolrun for the title of Midwinter Witch. As the first boy to openly study witchcraft, he’ll be the first boy to compete. The Vanissens, Ariel, and nonmagical friend Charlie attend, but a surprise at the Jolrun causes conflict. Ostertag’s signature bold, clear, thick-lined illustrations are at work here, as are her fascinating magical world-within-a-world worldbuilding and thoughtfully inclusive approach to LGBTQ and racial representation. Aster is biracial, with a white mom and brown-skinned dad, Ariel has olive skin and dark hair, and Charlie is black, with two black dads.

This solid addition to the series should please fans and newcomers alike.