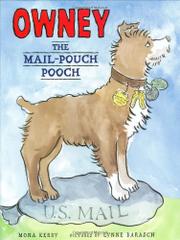 Going back to contemporary sources, Kerby retraces the travels of a stray terrier who became the semi-official mascot of the U.S. Postal Service in the 1890s and who, aboard ship and train, escorted mailbags to hundreds of destinations around the world. She sticks largely to facts—finding that accounts of how he got his name differ, she doesn’t try to explain its origin, for instance—but does tuck in occasional invented details to smooth the narrative. Although the text notes that his preserved body is still on display at the U.S. Postal Museum in Washington, D.C., it neglects to mention that he met his end by violence. Ever alert and sporting a harness increasingly covered in tags attached at his many stopovers, the small dog makes an engaging centerpiece in Barasch’s watercolor sketches. His tale has been told several times for younger audiences, most recently in Irene Kelly’s A Small Dog’s Big Life (2005); still, dog lovers will lap up this latest iteration. (photos, research note, sources) (Picture book/nonfiction. 7-9)