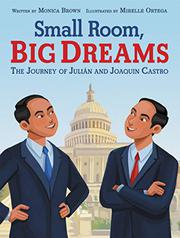 The Journey of Julián and Joaquin Castro

Before they were twins in the political arena, Julián and Joaquin Castro were kids whose mother and grandmother sowed the seeds of their big dreams.

This biographical narration of their early years traces a natural path through the seemingly inevitable political journey of the Castro brothers, who channeled their competitive personalities (challenging each other in both tennis and student senate elections) into public service and the betterment of their own community. They are seen as following the example set by the two women who came before them: their maternal grandmother, Victoriana—who crossed the border at 7 and then dropped out of school in third grade but nevertheless valued education as a means to succeed—and their single mother, Rosie, who knew she needed a seat at the decision-making table and fought to get it, breaking glass ceilings for both women and Mexican Americans. Brown includes important context on migration, the often forgotten segregation targeting Mexicans and other Spanish-speaking populations, and the poor city planning that often affects marginalized communities. Ortega complements the narrative with details in the illustrations that emphasize the struggles that the Castro family overcame to achieve their successes, beginning in the small room the twins shared with their grandmother. Some Spanish is naturally introduced in the text and supported by context clues, and a glossary in the backmatter provides translations. A Spanish edition publishes simultaneously. (This book was reviewed digitally with 12-by-18-inch double-page spreads viewed at 43.2% of actual size.)