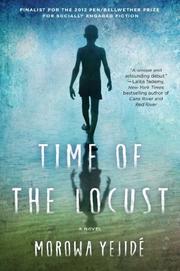 TIME OF THE LOCUST

Sorrow is piled on tragedy in an earnest debut that looks beyond neural disorder, prison brutality, racism and more to reach a place of peace and acceptance.

Imaginative if at times excessive, Yejidé’s first novel offers a notably empathetic portrait of an autistic child alongside a near-unrelenting vision of bleakness. Each of its three central characters is trapped in a different form of isolation: Horus Thompson, convicted of the murder of a retired police officer, is serving 25 years to life in a hellish Colorado prison. Horus’ ex-wife, Brenda, has sealed herself off from the loss of her husband and the problems of parenting her son, Sephiri, by gaining a dangerous amount of weight. And 7-year-old Sephiri, whose autism and lack of speech separate him from conventional interaction, escapes as often as he can from the torments of the “Land of Air” into his own “World of Water,” where animals and language offer him wonderful, soothing insights. Brenda believes that Horus knows nothing of his son’s existence, but her husband glimpsed the positive pregnancy test just before his arrest. Now, seven years into his sentence and buried below ground in solitary confinement, Horus’ mental stress and physical deterioration seem to be connecting him to the boy he's never met, who has started to produce brilliant, inexplicable drawings. At times almost mystical in its intensity, Yejidé’s prose brings lyricism to her dark subject matter and unhappy characters, eventually introducing a kind of magical restoration to her shattered fictional family.

An unusual, overemphatic but persuasively committed parable of time and transfiguration.