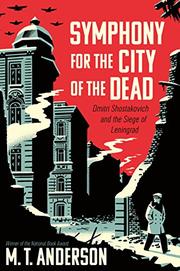 SYMPHONY FOR THE CITY OF THE DEAD

Dmitri Shostakovich and the Siege of Leningrad

The epic tale of the siege of Leningrad and its native son, composer Dmitri Shostakovich, whose seventh symphony comforted, consoled, and rallied a population subjected to years of unspeakable suffering.

Anderson vividly chronicles the desperate lengths residents went to, including acts of cannibalism, to survive the Wehrmacht’s siege, a 3-year-long nightmare that left more than 1 million citizens dead. The richly layered narrative offers a keen-eyed portrait of life in the paranoid, ruthlessly vengeful Stalinist Soviet Union, its citizens living under a regime so capriciously evil that one could be heralded a hero of the motherland one day and condemned as a traitor the next. The storytelling is captivating, describing how Shostakovich began composing the symphony under relentless bombardment in Leningrad and later finished it in Moscow, its triumphant performance in Leningrad during the siege, and how it rallied worldwide sympathy for Russia’s plight. Music is at the heart of the story. As Anderson writes in the prologue, “it is a story about the power of music and its meanings,” and he communicates them with seeming effortlessness in this brilliantly written, impeccably researched tour de force.

A triumphant story of bravery and defiance that will shock and inspire.