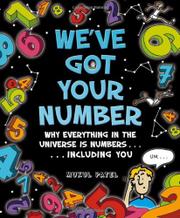 WE'VE GOT YOUR NUMBER

This breezy look at the tools, techniques, uses and universality of mathematics doesn’t add up to more than a muddle.

Patel begins by nonsensically arguing that since math is dependent on formal proofs and “beauty” (rather than evidence and experiments, which “don’t count for much”; take that, Galileo!), it’s not a science but “more like an art.” The author proceeds, however, to demonstrate the opposite by tracing its development through history as a tool for measurements and calculations that have promoted our understanding of the physical universe. Following opening chapters introducing number systems, primes, sets, zero and infinity, he whirls past types and uses of graphs and tessellations, imaginary numbers, algorithms, chaos theory, Newton’s laws of motion and more in single-topic spreads crowded with cartoon illustrations and boxed passages in high-contrast colors. Along with careless errors, such as twice misspelling Prussia’s capital and equating yards with meters in a measurement, the author delivers minidisquisitions on Menger sponges, Euler’s number and other curiosities that are unhelpfully vague, dizzyingly technical or both. Furthermore, on different pages he offers different etymologies for the term “mathematics,” and one of the several “Try this at home” demonstrations contradicts an adjacent claim that humans are bilaterally symmetrical.

Bottom line: Stimulating for math geeks and proto–math geeks, more confusing than enlightening for the rest of us.