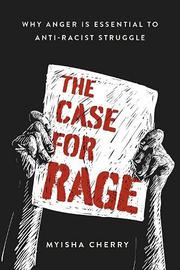 THE CASE FOR RAGE

Why Anger Is Essential to Anti-Racist Struggle

A philosophical manifesto defending anger as an effective instrument of protest against racism and oppression.

“I do not remember my first kiss. I do not remember the first book I ever read. I do remember the first time I was angry. And it was at racism.” So writes philosophy professor Cherry, recounting the day a classmate deployed the N-word against her for the first time. Her anger has not abated in the years since, even as manifestations of White supremacy proliferate. But what is one to do with that anger, even as well-meaning allies counsel people of color to respond with polite, calm counterargument? “Anger can be a force for good on the battlefield for justice,” writes the author. “We must remember this in the face of urges to abolish it altogether.” While one philosopher with whom she takes particular issue, Martha Nussbaum, calls anger “a bad strategy and a fatally flawed response,” Cherry unpacks Martin Luther King Jr.’s celebrated “Letter From Birmingham Jail” as a foundational document in what she calls “Lordean rage,” after the iconic poet and activist Audre Lorde. This Lordean rage ranks favorably in a typology of anger that she constructs, such as “wipe rage,” the wrath of the Charlottesville White supremacist marchers and their targeting of non-White and non-Christian others. Such rage, as well as the rage of narcissism, is the fevered, useless tool of the enemy, whereas “Lordean rage is a kind that is well suited to maintain itself just as it is, without needing to get out of the way so that ‘better’ emotions can get to work.” Although her argument is often repetitive, Cherry effectively shows that anger can be a positive force in organizing resistance and keeping the pressure on perpetrators of racism, sexism, and other societal ills.

A well-reasoned case for not holding one’s tongue in the presence of injustice.