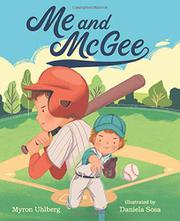 The pitcher who threw that “fat and lazy” ball has had a long, miserable winter reliving that moment and feeling responsible for the loss. Determined to overcome the disappointment and see a different outcome in the next season, this young pitcher sets out to practice, practice, practice, until every pitch is perfected and each of the 108 stitches in the baseball is completely understood. In the last game of the new season, the pitcher again faces the Catbirds. Again it is two out in the ninth inning, bases loaded, and McGee is up. Will it be a repeat of last year’s defeat? Uhlberg allows the pitcher to tell the story, focusing on the emotional ups and downs from season to season and during both championship games. The text does not rely on the usual baseball jargon but is instead filled with vivid language that perfectly enhances the action. Sosa’s brightly hued illustrations are carefully constructed to allow the main characters to express their emotions in body language while keeping their physical appearances neutral. For they are both McGees, and the narrator is the delightful Molly McGee, the younger sister of the fearsome batter, as readers learn on the very last page in what is clearly meant to be a clever twist.

Charming, but why would young readers still be surprised when girls are excellent athletes? (Picture book. 5-9)