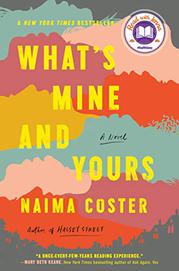 WHAT'S MINE AND YOURS

In a city in the Piedmont in the fall of 1992, Ray is baking croissants, preparing for the day that's supposed to change his life: A reporter is coming to profile the cafe he co-founded that has since become “his everything.” If business picks up afterward, he already has a list of things he’ll do. Buy his girlfriend, Jade, a ring and marry her. Buy Jade’s 6-year-old son, Gee—who is, for all practical purposes, also his son now—a chest of drawers. Take them on a trip. None of it will happen: That afternoon, Ray is shot and killed. Jade’s cousin owed money to a guy; Ray was in the wrong place at the wrong time. Then Coster skips forward a few years, to the outskirts of that city, where a woman named Lacey May Ventura is trying to raise three daughters on no money while her troubled husband is in prison; an unrelated story, on the surface, a single mother making compromises to get by. The story of the past, though, is then interrupted by dispatches from the present: In the Atlanta suburbs, Noelle, the oldest of the Ventura girls, is now a theater director in a disintegrating marriage. Jumping backward and forward in time and bouncing between families, Coster weaves together a gripping portrait of generational pain. But the details of her plot—carefully constructed, if not especially subtle—pale in comparison to her characters, who are startling in their quiet humanity. Coster is an exacting observer but also an endlessly generous one, approaching her cast with a sharp eye and deep warmth. The overlapping pieces fit together, of course, but it’s the individual moments that are exquisite, each chapter a tiny snapshot of a whole world.