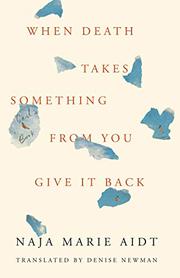 WHEN DEATH TAKES SOMETHING FROM YOU GIVE IT BACK

A memoir of the author’s struggle to find the words to mourn her son’s death.

On March 16, 2015, Aidt’s son, Carl, died after throwing himself out of a fifth-floor window; he had suffered a psychotic break after consuming psilocybin mushrooms. It takes a long time—nearly halfway through this slim, devastating book—for Danish poet and fiction writer Aidt (Rock, Paper, Scissors, 2015, etc.) to state those facts so plainly. But her sense of grief is present from the first page, and she deploys multiple rhetorical elements—poetry, literary criticism, journals, all-caps, exclamatory text—to reckon with her loss. She returns over and over to her memory of the phone call delivering the news, adding new details each time, as if bracing herself to express the fullness of the event. Between those moments, Aidt bemoans the impossibility of putting her feelings into words through run-on anger (“I hate writing don’t want to write anymore I’m writing burning hate my anger is useless a howling cry”), unusually structured poetic passages (“Panic like a geyser inside the body / shoots its poison-water / up / from underground / to / the reptilian brain”), and sober contemplation of other grief-struck books such as The Epic of Gilgamesh, Joan Didion’s Blue Nights, and Anne Carson’s Nox. The difficulty of articulating grief is itself a cliché of the grief memoir, but Aidt’s shattering of genre forms both underscores the feeling of speechlessness and gives it a palpable shape. (The book’s orthography bolsters that sense, playing with font sizes, line breaks, and italicization; translator Newman handles these rhetorical shifts with grace and clarity.) Carl’s death thrusted Aidt into a world where “nothing resonates or can be established, where nothing in the entire world is recognizable.” Yet this book is an alchemical feat, giving shape to the most profound sense of absence.

A stirring, inventive masterpiece of heartbreak.