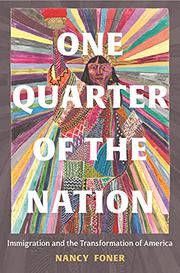 ONE QUARTER OF THE NATION

Immigration and the Transformation of America

An account of how the 1965 Hart-Celler Act, in broadening immigration beyond European quotas, transformed the racial makeup, economy, and politics of the U.S.

The elimination of origin quotas put in place since the 1920s, which had favored European immigrants, paved the way for a great surge of new immigration from Asia, Latin America, and, to a lesser extent, Africa and the Middle East. The change in numbers, as Foner clearly explains, was enormous. In 1960, for example, 75% of foreign-born residents came from Europe; by 2018, those born in Latin America and the Caribbean went from 9% to 50%, Asians from 4% to 28%, and sub-Saharan Africans from 1% to 5%. The astonishing racial shift has affected all aspects of American life (Whites comprised only 60% of the population by 2018). Foner—a professor of sociology and author of One Out of Three: Immigrant New York in the Twenty-First Century, among other books—makes a convincing argument, as other scholars have in recent years, that these changes have been positive and significant for the U.S. as a nation, countering uglier, speculative narratives about the detriments of immigration. Neighborhoods across America have shifted hugely, from all-Black (Caribbean and African) sections of Brooklyn to all-Asian sections of Los Angeles and other cities in California and elsewhere. The author closely examines the economic benefits in immigrant work, filling both the top and bottom of the occupational ladder, from innovative new companies to the caretakers and farm workers, all necessary for the functioning of the American economy. In scholarly but accessible prose, Foner also explores this huge cultural shift in terms of TV, movies, literature, and other elements of arts and culture. This book will be a good fit for libraries and school collections in order to refute erroneous and racist arguments regarding immigration.

A succinct, positive look at the great benefits, both historically and currently, of embracing immigration.